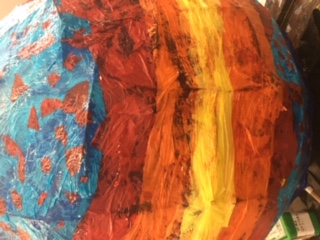 Cowley Road Works were thrilled to partner with Oxford Physics (Oxford University’s Department of Physics) in a joint community project, funded by an award from the Science and Technology Facilities Council (STFC). The project connected Oxford Physics researchers with community groups using the theme of Carnival 2019 – Space is the Place – as the launchpad for an exploration of space science, technology and creativity. The results of which were seen on Carnival Day.

The project connected four separate groups of Oxford Physics researchers with four community groups each working with artists to co-create four space-themed carnival art structures for the Carnival procession. The design and making of these structures ran over a six-month period of sustained engagement with the community groups representing a cross-section of people facing barriers to participation in science and who are under-represented within STEM (science, technology, engineering and mathematics) careers..

The community groups involved were:

The project focused on four strands of space-related research in Oxford, each led by researchers with a passion for community engagement:

The community groups were involved in a series of activities which included stargazing and space inspirations days together with designing and building workshops.

STFC public engagement grant-holder Dr Sian Tedaldi, who heads Outreach at Oxford Physics, was the project lead. She said: “Working with Cowley Road Works offers a great opportunity to bring some of the inspiring and exciting STFC science and technology to an audience who might not otherwise get to enjoy it.

“This project enabled us to reach out to and engage with groups currently unrepresented in these areas of study and work, and hopefully spark their interest in science – and encourage them to continue to learn about STEM.”